Synesthesia is a genetic condition of unknown cause in which a stimulus of one sense causes an involuntary added perception in one or more other senses, a 'neuro-sensory cross-wiring'. My variant of synesthesia causes the interplay of colors, shapes and sounds. I see sound, hear light, and read and do math in colors. 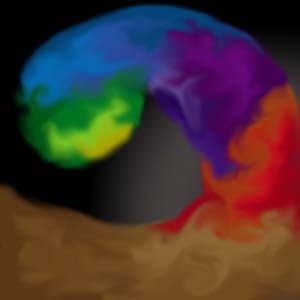 This approximates what some music looks like to me. Specifically, this exact frame came from a song by Sigur Rós called Viðrar vel til Loftárása. At seven minutes and fifty five seconds into the song (when the violin solos kick in over the guitars), this is what the sound looks like to me. Now imagine it moving!

For example, when I look at the letter 'A', I see it as the color it's written in, but perceive it as being written in red. When hearing music, I 'see' the sounds play out in front of me, overlaid on my visual perception of reality. Likewise, when I see light (especially bright light), I hear tones: bright pure white light sounds like squealing brakes (so I wear sunglasses in order to carry on conversations in bright sunlight). The secondary perceptions never change for any primary perception, which is why I can tune my guitar by just 'looking' at the colors each string makes. 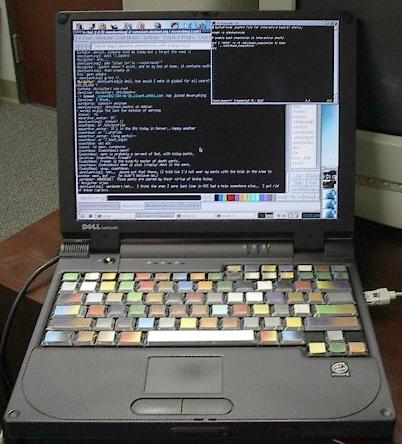 This is what my old laptop looked like. I removed each of the keys individually and taped colored pieces of paper over the keys corresponding to my synesthetic perceptions. It actually allowed me to type faster and more accurately. I've done this to a few laptop keyboards since then, but it becomes troublesome when trying to type in other languages.

The upside is that it generally doesn't take me very long (three to six months, depending on complexity) for me to learn a foreign language.

When I read anything, the letters and words are colors. Since I 'see' the colors just as vividly as regular vision, I photographically remember the color sequences. My name, to me, isn't "danne", it's "DarkGreen/Red-LightBrown-LightGreen". This is why it's so easy for me to discern written languages: every language, due to character frequency, has different overlying tones. Learning languages is also simplified - once I know the syntax, grammar and phonology, the vocabulary is all just color memory.

Jill Burrows and I created an Android application called Superpowers to demonstrate what it's like using your phone's screen, speaker, microphone, and camera. It's freely available in the Google Play store. Be sure to plug in headphones before starting the app. Otherwise, it will just beep loudly until you quit.

How did you get synesthesia?

Synesthesia is a genetic condition. It affects about 1 in every 25,000 people. It's genetically transmitted through the X chromosome. Those of us with synesthesia tend to be either left-handed or ambidextrous, tend towards some form of autism, and have near-photographic memories with higher frequencies than normal.

What written material is colored?

Every character that I know how to pronounce has a color: Latin, Greek, Numbers, Logic symbols, Cyrillic, and a handful of characters in other languages. I haven't learned a pictographic writing system (such as Hanzi, Kanji, or Hanza) yet, though, so don't know how color will interplay with the radicals yet once I do learn one.

How to words get colored by letters?

These colors are on a letter-by-letter basis. When words are taken as a whole, the whole word is one color, taken mostly from of the color of the first letter, a little of the second, and very small bit of the third. If, however, the word begins with an 'O', then the word takes the color of the second letter. Words can take on colors beyond this pattern if stressed syllables later in the word dominate its pronunciation.

These are rough approximations of the colors I perceive when I look at certain letters: